There is an ongoing and never ending debate orbiting the questions that astronomers have had for decades about the planet Mars and its history.  New evidences have been found as of late that there was more water on Mars than originally thought.  This body of water would have been located in the northern hemisphere of the planet and would have covered nearly as much of the planet as the Earth’s Arctic ocean, which is larger than scientists have previously estimated. This claim that there was more water there than previously thought supports the theory that Mars was able to inhabit life when the body of water was previously there.

The science and chemistry behind the discovery is that the world, much like earth, has two forms of water.  One form is H20, which earth is very familiar with.  The second is HDO.  the “D” stands for deuterium, which simply implies that there is one more neutron in the atom that that of normal H20.  Earth is said to contain this molecule as well, but have less in quantity than its neighboring planet Mars, having found about eight times as much deuterium in Mar’s atmosphere.

Our results tell us there had to be a northern ocean.

Where did the water all go then?  Well, besides the frozen icecap on top of the planet, it has been theorized that most of the water has evaporated and become too light to stay on the planet’s surface and simply was lost into space.  Some even say that the presence of meteors and other celestial objects crashing down on the planet had an effect of the water escaping into space as well. 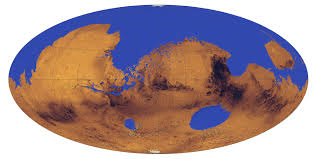 There is still much debate over whether this theory is true with many believers and non-believers.  One of the crucial arguments as of late is how the body of water was able to survive without evaporating or getting frozen with such a light atmosphere.  Scientists state that it is hard to know what sustained the ocean because they have no way of really knowing what the atmosphere was like while the body of water was there.  It has been found though that channels that used to carry water lead from the southern part of the world to the northern, possibly denoting that the water moved from one side of the planet to the other.  All of these evidences suggest that at one point Mars did have an atmosphere that was able to sustain large bodies of water and plausibly life.